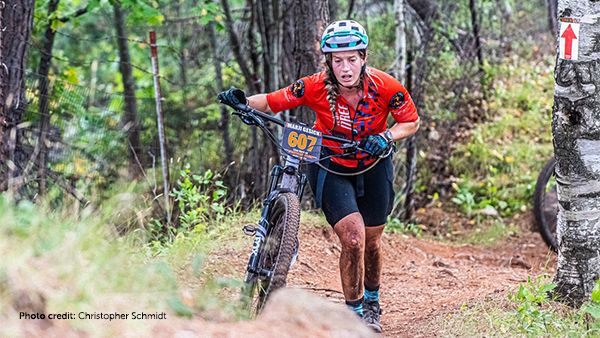 When I first started mountain biking all I wanted to do was keep up with my mates (well, that and not puking into the bushes from trying to keep up, but that's another story...) but very soon that progressed into trying some races, broadening my competitive horisons and starting work with a coach (because we didn't use the internet back then and info on training was sparse)

One of the first tasks he set me was to think of some goals for my performance; he asked me: what did I want to achieve from my cycling? My answer was, as I now know with the hindsight of coaching for a couple of decades, pretty standard: get faster, keep up with peers, do better. He got me to hone in on my goals, make them more specific, to attach timelines to them, and to think both short and long term.

The big, long term, goal was that I wanted to be elite National XCO champion. Short term we had gaining a licence in a category higher, losing bodyfat, improving skills, learning to train, and then this ultimately lead onto how to understand performance and coach others.

My coach looked at the goals, looked at the time frames, and then we decided if they could be realistic. Some were, others were but only if we adjusted the timeline. Becoming elite, it turns out, takes a combination of training duration, training intensity, rest, recovery, and using a long enough timeline to allow the body to adapt at natures speed. I would say that I'm of middle-ground genetics. That is I've potential, but it has limitations, but with enough work, and a long enough timeline, a lot of goals and aspirations are possible.

This journey started when I was 20 years old. Next year I turn 50. I've still never been the National XCO champion! So maybe some goals will never be possible, or maybe my change of direction, into the longer races to win a world masters title at 24 solo, after 15 years of chasing the National XCO dream stopped that dream from finding fruition.

So how does this relate to the Marji Gesick and your goals and aspirations? As a coach and an endurance athlete of 3 decades what's my take on the Marji Gesick? I find the best way to consider this is to relate it to other mainstream sports people interested in the race may follow. It gives perspective. Allows for better understanding of the challenges and how we might fit into this sphere and carve out our own success.

The 50 mile is a round of the NUE Marathon series. Marathon being the UCI recognised distance/duration. In very basic laymans terms this makes it the equivalent of something like the NBA but for endurance mountain biking. It's the top level for the fastest competitors. Completion, is a big deal, and a worthy goal for anyone bar the elite. The elite are fighting it out for on the day and overall series glory. The 100 mile is the ultra version (and big bad brother) of the 50. In other sporting terms it doesn't really have a comparison. Maybe it's like going to the Olympics for endurance mountain biking? One thing is certain: it's BIG.

The beauty of cycling, and endurance mountain biking in particular, is that we can all play in the same arena with the big boys. In making our goals though we have to keep some perspective on what we are entering and set them appropriately. If I'm the MTB equivalent of a Jordan or a Bryant then maybe I'm going for a buckle. If I'm a retired Rob Lee then a buckle is going be a very tall order, and if I'm new to racing and have never tried Marji 100 before then I'm most likely setting myself up for a guaranteed failure if I can only see success as coming home in less than 12 hours next season.

To quote one of the top coaches in the world (Tim Grover, from his booking entitled "Winning") we need to consider 3 things when we set our Marji Gesick goals:

In short, to find success at Marji 2023: Enter because you really want to, because you crave the long hard challenge, find purpose relating to the race that is specific to you. Do the distance that will stretch you, that you want to do, and don't let opinion sway that decision. Set a goal for that distance, that has a realistic chance of success based on who you are and where you are today and the time left until the next race. Set to work on a plan, stick to it, commit the time, do what it takes, and make it happen. When you finish the Marji, and your 2023 season, revisit you goal, check in with that original goal, judge your achievement on how far you've come and successfully hitting your goal.